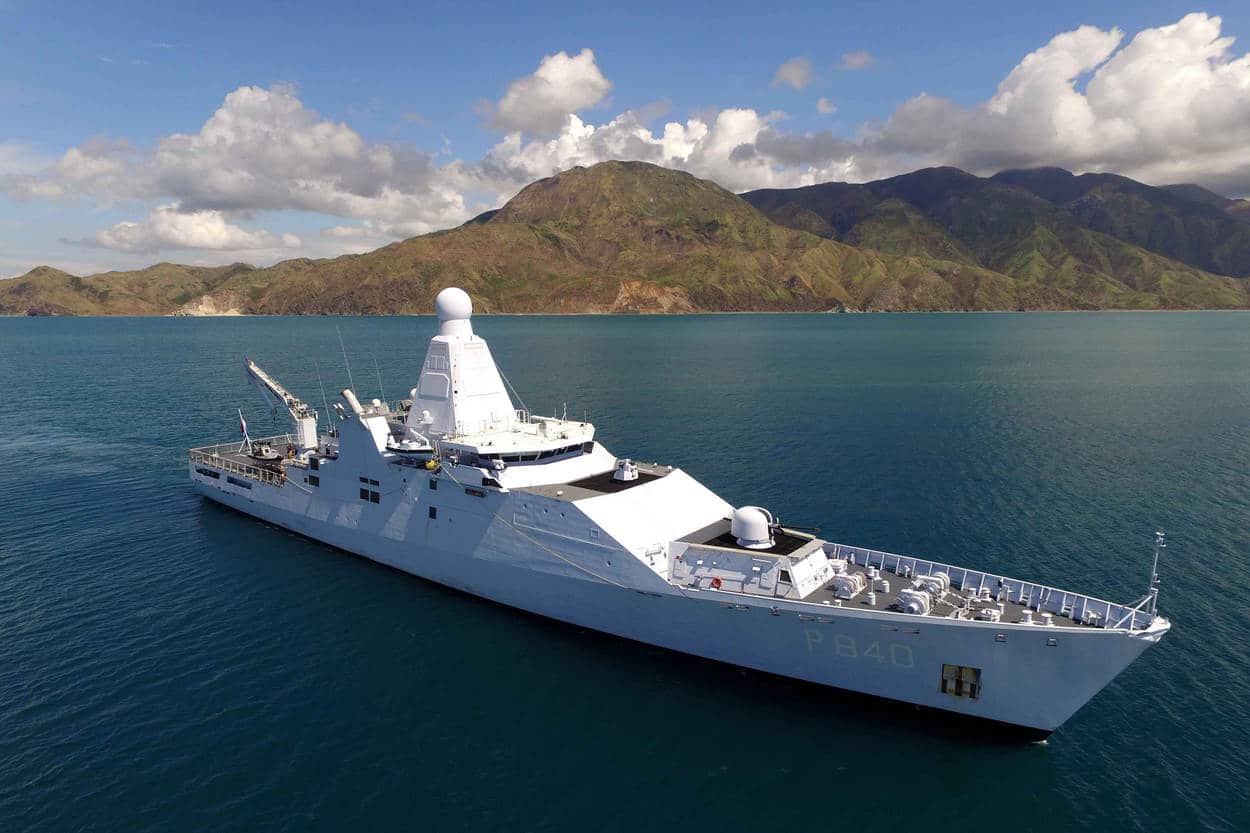 The Royal Netherlands Navy deploys the OPVs in the Caribbean and the North Sea. The vessels can support international task forces in anti-piracy  missions, counter-drug operations and block ships in coastal areas during  crises.

“With the ability to carry supplies and more than 100 people, the vessels can provide platform stability in the Seven Seas”. Its stealthy design incorporates innovative techniques to reduce radar reflections. The body is built with thick steel, which has a lower tensile strength. It is heavier than the steel used for frigates and can resist the impact of small-caliber weapons.

The hull is stretched and the bridge and superstructure are placed aft wards, to help optimise the sea keeping capabilities of the vessel. The speed is cut down to reduce fuel consumption and increases the range of the vessel. Two rigid-hulled inflatable boats (RHIBs) and one NH-90 helicopter are also carried to support interception operations.

The Holland Class is equipped with an integrated Fire Control & Command System and two monitors for non-lethal protection and firefighting. The OPV also features a gas citadel, explosion-resistant structures and redundant & decentralised systems.

The patrol vessel has an overall length of 108 m, a width of 16 m and the displacement of the vessel is 3,750t. The OPV accommodates 50 crew members and can accommodate up to 40 non-listed persons, including a helicopter detachment, law enforcement detachment and a medical team or a complete platoon of marines. Approximately 100 evacuees can also be boarded. The ship can sail at a speed of 21 knots and its maximum range is 5,000 nautical miles e.g. from Holland to Australia.

Construction was carried out in parallel, with the first two at Damen Schelde Naval Shipbuilding in the Netherlands and the remaining at Damen’s sister shipyard in Galatz, Romania. The project costs were estimated at €467.8m ($687.9m).

The main gun is an Oto Melara Super Rapid gun. It has a firing rate of more than 100 rounds a minute maintaining an accurate range. The vessel has two more Oto Melara guns and two additional small machine guns.

The patrol vessel has a fully-equipped hangar to support the operations of a NH-90 helicopter. The helicopter is equipped with homing torpedoes and a dipping sensor system. The scout radar on the helicopter allows it to make observations beyond the radar horizon of the OPV using link/16. Underneath the helicopter, space is available to accommodate relief supply containers.

The OPV is the first vessel within the Royal Netherlands Navy to be fitted with Thales Integrated Sensor & Communication Systems (ISCS). The system integrates optical sensors, RF systems and radars. ISCS includes:

The Holland Class is equipped with a combined diesel or electric propulsion system (CODOE). The patrol vessel is powered with two mans 12V28/33 diesel engines rated at 5,400 kW and fitted to a Rank gearbox.

The wireless communication and messaging system on board Holland Class is about using function based workflow to provide intelligent messaging to and from crew members.

The first group of intelligent messaging is called system maintenance messaging and provides real time maintenance information  from platform systems generating system messages & tasks to be accepted by the responsible crew member. These system messages will be controlled by supervisors and/or automated escalation control procedures eg a non-confirmed fire detection notification. In this case the damage control assistant, responsible for lets say the damage control section AFT, will receive a short system instruction to check the fire alarm accordingly. DCA-AFT is requested to report immediately along the chain of command towards the damage control officer.

Combining technical and communication intelligence with over 20 years of naval experience.

LINKS FROM OUR PARTNERS